Hello there! We're Crawford Supply Group, a Midwestern Bath & Kitchen Supplier with Designer Showrooms. We're here to answer your questions about bathrooms and kitchens. Follow our blog for handy guides and design inspiration!

The Shocking Truth about Tap Water 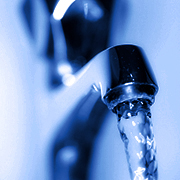 This summer, many of us received in the mail our annual drinking water quality report from our local water suppliers. The majority of our reports likely stated that our water contaminant levels fell below their Maximum Contaminant Levels, or MCL.

And yet, those of us with no violations on our water quality report might have seen trace amounts of contaminants such as arsenic, nitrate and chloroform listed. Others might recall the drinking water violations of 2009, where 26% of health violations were unreported or inaccurately reported.

These findings raise the questions:  can we trust our public water supply? And what   does a passing water quality report really mean?

What Your Water Supplier Won’t Tell You

Even if your drinking water quality report shows no contamination violations, that doesn’t mean your water is free of impurities. There are many external factors that won’t be included in your report, including:

Under the Safe Drinking Water Act (SDWA), public water suppliers must test Contaminant Levels of around 90 contaminants.  Currently, there are tens of thousands of chemicals used in the U.S., with 1000+ being added each year.

Unfortunately, environmental legislation has been slow to add the additional contaminants to the testing list–no new contaminant regulations have been added to the SDWA since 2000. A pharmaceutical cocktail of aspirin, antibiotics and other types of medications have been found in our drinking water.

Many contaminants that meet legal contaminant level limits may still present health risks. An E.P.A. study found that even if a community’s water supply met the drinking water standards for arsenic, 1 in every 600 residents would still likely develop bladder cancer from their tap water.

Seasonal contaminant spikes may occur in some regions, skewing the testing data in a deceptive manner. Public water supplies are only required to test once a year (sometimes less).

Atrazine, a weed killer that’s banned in the European Union, spiked at illegal water contaminant levels in the Midwest/South during Spring/Summer 2009. However, because of the way these spikes are averaged, only 3 of the 139 water systems sampled were found to be in violation of the atrazine standard.

In 2009, the New York Times discovered that the Clean Water Act has been violated more than 506,000 times since 2004. Some companies test once a year to avoid reporting seasonal spikes; others illegally avoid reporting their emissions.

What’s in Your Drinking Water?

Many of the contaminants in the following products are not covered by the Safe Drinking Water Act, so most public water supply companies don’t test for them:

A point-of-entry water filter is attached to the main household water line, filtering all water in the house. This is your first line of defense against dirt, chlorine, and other water contaminants. If you’re seeking to purify your entire household water supply, choose this filtration method.

A point-of-use water filter is attached to a single water line, such as a faucet. These may be installed under the sink, on the counter, or on the faucet. If you‘re looking to filter tap water from one specific plumbing fixture, choose this filtration method. Point-of-use systems can also be used as a second line of defense for point-of-entry systems.

If you’re concerned about your tap water and are located in Illinois, Michigan, and Pennsylvania, contact a Crawford Supply Group professional to learn more about your water purification options.

* Get an image next to your comment by visiting Gravatar.com and uploading a profile photo that links to your email address.